The shadow of the woman wins

BY PMA RASHEED
The Gulf Today, 7 May 2009, (Photo by Mohammed Rasheed)

Her shadow captured in her own photography speaks about her identity in her land. She captured the snap from part of a desert land of 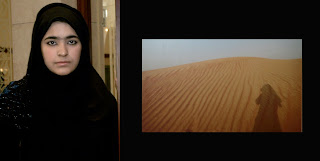 the UAE, and wanted to declare the world that the UAE women are not facing any kind of identity crisis.

She is a third year bachelor's student for international studies in ZU, and extremely proud of being a prosperous Emirati woman with a different identity.

"I didn't win last year, so I put more efforts this year to participate in the contest and by winning the first place I tried to prove that the UAE women are not behind the curtain of the mainstream world," said Asma on the sidelines of the award ceremony.

"My winning work has been captured when Sheikh Mohammed Bin Tahnoon Al Nahyan attended the Abu Dhabi Yatch show recently. Meanwhile, the snap of a man surfing in Abu Dhabi corniche helped me win in the theme of the life of UAE people," said Fatima.
She is a third year bachelors student in public relations and management in ZU's college of communication.

I started taking photographs with my mobile cam a couple of years ago. But when I studied photo journalism as part of my university education, I took it seriously and wanted to put a professional approach to photography," she added.

About 24 outstanding performers participated in the Noor Ali Rashid Photography awards 2009 were honoured on Wednesday at ceremony held at Cultural and Scientific Association hall in Dubai.

Noor Ali photography award has been designed to tribute the UAE's royal photographer Noor Ali Rashid by recognisng the talents of upcoming student photographers from the country's accredited universities and colleges.
"The competition is aimed at encouraging the young talents in photography and videography focussing their calibre on visual bodies of work that capture the essence of the UAE's land, people and leaders," said Dr Suleiman Al Jassim, vice-president of ZU university.
Posted by PMA RASHEED at 10:42 PM 1 comment: