By PMA RASHEED
3 Dec 2010, The Gulf Today
AS they sat behind the scenes or chatted in front of their screens, the bonds blossomed. Coming from different backgrounds of life, they met online, shared the warmth of friendship and conversed about everything under the sun, yet remained unseen for years. 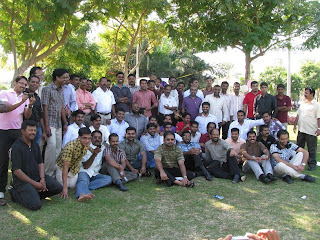 From the active socialising platform of Facebook, a group of expatriate cyber-geeks landed on the meadows of Dubai’s Zabeel Park on the occasion of the UAE’s 39th National Day and met their longtime online friends face-to-face for the first time.
Around 200 dynamic FB members, hailing from the South Indian state of Kerala and working in different parts of the UAE, congregated in Dubai to celebrate the occasion of their foster nation’s anniversary.
Compared to other mass celebration modes, the FB meet turned out to be a first-of-its-kind approach, in which the cyber socials assembled to share their spirits and passion, symbolising the unity of the Emirates, according to the organisers.
They declared that the Keralite Facebook Group of the Emirates will celebrate its anniversary on the occasion of the UAE National Day to share feelings of patriotism and sense of belonging and loyalty to the country.
Excited to be present at the FB gathering, a former UAE resident of ten years, Murali Vettath who later moved to the UK, landed in Dubai on the early hours of the National Day to express his love for the country that boosted the first stage of his professional life.
Pramod Kadavil Pushkaran, a Fujairah resident and Facebook social, presented the concept of the FB’s expatriate group in the UAE. 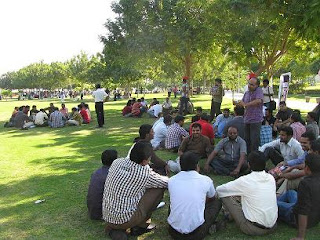 “Apart from engaging in mere entertainments and redundant chats on Facebook, the group will inspire the members to develop social responsibility, focusing on community empowering activities through different creative channels,” he indicated.
IT professional Iqbal Kanjiramukku, who took initial efforts to organise the FB meet, said that the mini meet on the national day would be added as a golden leaf to the history of the UAE and to the vibrant track record of Facebook.
“Among the enthusiasts, there were writers, poets, thinkers, professionals, philanthropists, social activists, members of political and religion organisations, and ordinary members too,” he added.
“But no place has been provided to promote any particular ideology or sect and class of people. The group will work on the humanitarian ground, inspired by the increasing strength of the social networking world,” pointed out James Varghese, an investment professional and creator of 4,700 member Malayalanatu FB page.
“The primary mission is to launch activities to alleviate woes of thousands of expats residing in the UAE, by effectively utilising the power of Facebook networking,” he noted.
Ahamed Maruthiyur, another FB enthusiast, said that a 25-member committee has been formed for the Keralite Facebook Group of the Emirates with executive members representing each Emirate.
“The group will generate funds through individual contributions and small level sponsorships to support unemployed, medically-needed, and financially failed expatriates respectively to find them jobs, arrange better treatments and send helpless people back home,” he elaborated. 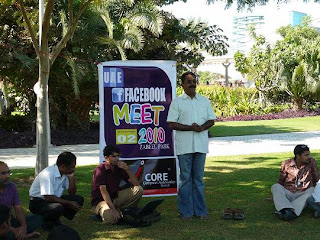 Ravindran Nair, a social activist and energetic FB member from Abu Dhabi, said the function of the group will be transparent in extending charities and funding for it. The charity will be extended upon cross-checking genuine applications to the committee.
“This is a debut meeting at which some 200 members got together. More members will be mobilised in future, as strategies have been planned to spread the message for humanitarian activities through effective communication campaigns,” he indicated.
Liyakathali Chavakad, a Dubai Hospital employee who keenly socialises on FB, opined that the group is expected to be uplifting cultural values among the members, especially in the approach of interactions among the cyber socials.
“The gathering and the formation of the group will help the users spend their time fruitfully for social causes and promotion of creative ideas, by expressing mutual respect and love,” he added.
(Pics supplied)
Posted by PMA RASHEED at 1:56 PM