"Gaza will never die, Protect Gaza, With you Gaza, Wake up Muslims" are a few lines seen in the collage of thousands of messages written by Palestinian supporters, numbering more than 5,000, on a giant black cloth plac 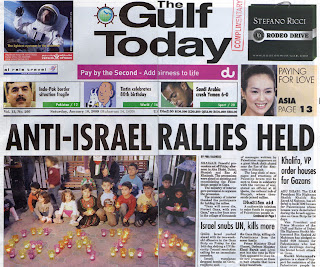 ed near the Eye of the Emirates in Sharjah.
The long cloth of messages and reactions of Palestine lovers will be sent to Gaza in solidarity with the victims of war, stated an official at Al Qasba, the cultural hub of Sharjah.
Anti-Israel rallies
Peaceful processions set off Friday afternoon in Abu Dhabi, Dubai, Sharjah and Ras Al Khaimah. The processions were aimed at assisting and consolidating the Palestinian people in Gaza.
A protest was held at Buheirah Corniche in Sharjah, starting from the Noor Masjid area. The demonstration witnessed the participation of around hundreds people showcasing their solidarity with their brothers in Gaza.
In similar protests across the country, thousands of people from different nationalities held demonstrations in various emirates.
In Abu Dhabi, people participated in the protest which started at around 4pm on Friday at the Abu Dhabi Chamber of Commerce and Industries area in the Corniche and ended at Khalidiyya.
In Dubai, a rally at the Creek Park drew over 3,000 Palestine supporters, including local citizens and expatriates. They carried banners and flags of Palestine and raised slogans in support of Gaza victims and against Israel.
In Ras Al Khaimah, Dr Sheikh Sultan Bin Kayed Al Qassimi, the chancellor of al Etihad University, headed a procession that set off from Al Manar mall. Dr Abdullah Belhen Al Shehi, member of the federal national council and Mohammed Ahmed Al Keet, counselor at the Emiri court, in addition to a number of offici 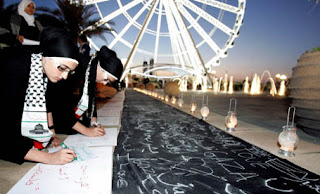 als and a crowd of UAE nationals, Palestinian, Arab and Islamic communities in Ras Al Khaimah took part in the procession.
The UAE ministry of interior gave permission to organise the processions. The ministry thanked all the participants for holding the rallies.
Similar demonstrations were also organised by humanitarian associations, including the Red Crescent Authority, in different Middle Eastern countries.
Dhs315m aid
A nationwide telethon to raise funds in support of Palestinian people in Gaza got underway on Friday afternoon. The live TV and radio campaign, which started at 2.00 local time, has so far raised Dhs109.1 million.
Extending cultural support to the victims of Israeli atrocities on Gaza, hundreds of Palestinian expatriates as well as Gaza supporters of different nationalities congregated on Friday evening at Al Qasba, Sharjah.
"The programme titled "To the Children of Gaza with Love" is aimed at raising awareness of the children to Palestinian culture, as the UAE is the second home to thousands of Palestinians and expatriates from other parts of the world," Hassah Sultan, public relations manager at Al Qasba said.
National anthem of Palestine
"My country, the land of my grand fathers, the nation of eternity.... with resolve of the winds and the fire of the guns, and the determination of my nation in the land of struggle...," hundreds of Palestinian teenagers were singing their national anthem loudly.
"Palestine is my home, Palestine is my fire... I swear under the shade of the flag, to my land and nation, and the fire of pain, I will live as a revolutionary, I will go on as revolutionary, I will expire as a revolutionary until I will be back...," they continued to sing.
With love
Eleven-year-old Bader has drawn a picture of Gaza city and the lives of people there, as he dreamt of his mother country. Then he pasted the water colour painting on a wall set up under a palm tree in Qasba. Many children gathered in the corner painting Palestinian symbols, traditional icons, flags, suffering people lives, damaged building after the Israel's attack as well as their hopes on the city of Gaza.
"My parents don't usually allow me to watch television, so I was not aware of the issues over there. Now only I realised about what is happening over there, and the pains and agonies of thousands of the people and children at my age," said Raghad, an eight year old girl from Bethlehem. She was expressing her solidarity to the Palestinians by designing a flag of her nation.
Cultural support
"There are a number of cultural activities and entertainment programmes involved in the campaign and all the proceedings will go to strengthen the humanitarian initiatives in Gaza. Well-wishers have been donating gold and other valuable items, and spending on different kinds of objects showcased at the venue for fundraising," Hassa added.
Amgie Sharaf, a Palestinian national and volunteer of the programme, said: "Aimed at inspiring young minds, the campaign activities include face painting, art designing, story telling, puppet show, candle lighting and a long black cloth for writing messages for the even visitors. Different corners and kiosks also arranged to receive contributions by selling Palestinian antiques and T-shirts imprinted with the message "Gaza dying to live".
Light of hope
"The corner named "Light a Candle for Gaza" has been set up to bring children to the frontline of the humanitarian activities, by asking them to drop some coins and enjoy the passion of lighting up a candle to share their solidarity towards the Gaza victims," she added. 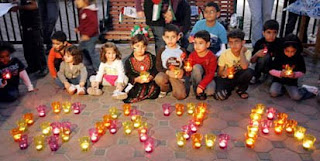 At a kiosk where Mohammed, an expat from the northern Palestine, has displayed a plenty of accessories such as wrist bands, head bands with Palestinian flags, necklaces, chains, mobile hangers and different scarves.