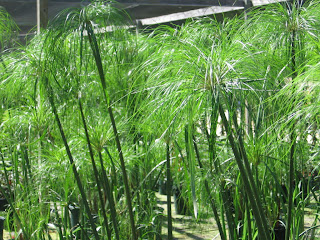 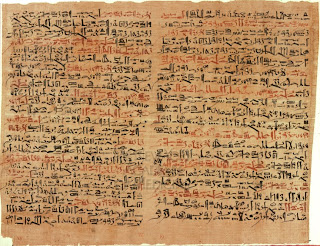 The Ancient Plant
Papyrus is a vital and indispensable flowering fresh-water reed of ancient Egypt. On the banks of the Nile and throughout the delta, tall papyrus clumps and thickets flourished.
It was a natural symbol of life itself and the primeval marsh from which all life came. Papyrus shaped columns common in many temples may reflect this double symbolism.
In art, the papyrus clump represented the marshlands. Papyrus represented the concept of "around" or "behind", as a depiction of the phrase "All life and protection are around".

Historical relevance
It made an extraordinary and historical impact on the Western world. But papyrus paper was not its only use. There were many things made from this most adaptable and extraordinary plant, which grew in great abundance along the banks and in the marshes watered by the great Nile River.
German Egyptologist Georg Ebers wrote, “It was of the greatest consequence for Egyptian industrial arts that one of the most useful plants the world has ever known grew in every marsh. The papyrus reed was used as a universal material by the Egyptians, like the bamboo or the coco-nut palm by other nations; it was the more useful as it formed a substitute for wood, which was never plentiful.”
Papyrus is quite a fun plant and it will amaze you in how many ways it pervaded the lives of the ancients. Papyrus played an important role in keeping their land vigorous and humming with energetic activity.
Papyrus is one of the most ancient plants known to humankind. Egypt is believed to be its place of origin. The tall, willowy plant predates the Dynastic Period.
Throughout the dynastic periods, papyrus brought nothing but satisfaction and benefits to Pharaoh and his people.
The green plant played an important utilitarian role in the ancient Egyptians daily life, but today, it has almost disappeared from the land. Scottish traveller James Bruce (1730-1794), wrote about the papyrus growing in Egypt and expressed his thoughts about where it came from: “The papyrus seems to me to have early come down from Ethiopia, and to have been used in Upper Egypt.”

Scientific features
The scientific name of Papyrus is Cyperus Papyrus. It’s a sub-species from the family Cyperaceae, or sedges, a large family of grasslike plants of probably four thousand species known in various parts of the world.
It is a tall flowering freshwater reed, which had at one time grown in great abundance in the marshes along the Nile River. The plant had flourished well in these abundant waters, in the rich, wet and muddy areas, which provided its nourishment.
Papyrus, a fresh water plant, was doomed. Much later when paper was produced from material other than papyrus, the plant was no longer necessary to be cultivated and it died out.
A closer look at the Cyperus papyrus will bring into focus a few of its main botanical characteristics. The plant in great detail, only part of its very complicated structure will be highlighted, excluding its intricate cell system.

Papyrus Paper
Egypt was the inventor of papyrus paper. Actually we probably think of papyrus as paper when we think of it at all. True, the principle importance of papyrus was as a surface for writing and illustrations. It is still unknown, though, exactly when papyrus was created in Egypt as a writing material. Much about the history of Egypt and the ancient world came down to us as recorded on papyrus paper.
Rolls and documents on papyrus were kept in wooden chests, which are often represented standing on the ground in front of scribes.
Much information about the Greek civilization has come down to us through papyri. Egyptian papyrus became the basic writing material for the Greeks. In the Ptolemaic Period, when Greek pharaohs sat on the throne of Egypt, high quality papyrus production and trade was under royal ownership, a monopoly in the control of Pharaoh. Papyrus was mainly used by the literati, for legal papers, and affairs of state.
Egypt had manufactured papyrus paper by carefully guarded processes…. They had made of it the finest writing material known…indeed, without such a relatively cheap and convenient material literature and the sciences could scarcely have developed as they did. Apparently Egypt was able to keep its process a deep secret and maintain its monopoly.
It was portable and easy to record information via a reed pen, compared to the “more cumbersome or more expensive writing material, such as stone and metal plates, wooden and clay tablets, or leather.”
Many writings on papyrus by the ancient Egyptians did manage to survive. They are preserved in museums and institutions all over the world. The ancient Egyptians did not leave the method of making papyrus paper, but only wall paintings of its being collected.

Uses of Papyrus
Uses for the plant were endless. They show the artistic, inventive and practical character of the ancient Egyptians in utilizing this most important natural resource that surrounded them.
Peasants as well as the wealthy had many useful items made of papyrus in their dwellings. There were also numerous medical uses.
The plant was also of greatest use as food. Egyptians chewed the papyrus raw, swallowed the juice and spit out the remains.
Papyrus is represented in many paintings and temple reliefs as well as in architecture.

Today
The ancient species is now found growing naturally in the Wadi Natron, an oasis area just west of the Delta in Egypt as was mentioned earlier. This survivor is considered as the ancient species, but there are so many variants that problems have arisen in pinpointing the exact ancient plant species.
The ancient plant is still profuse along the White Nile in the southern Sudan, some 1,500 miles south of the Egyptian border. Various species of papyrus are found in other parts of the world, including the United States, and the continent of Africa such as in large areas of west, east and central Africa and on the island of Madegasca. The papyrus groves of Sicily are thought derived from papyrus introduced from Egypt by the Arabs in the 10th century A.D.
Posted by PMA RASHEED at 12:20 PM