A record number of animal disease prevention procedures have been conducted in Dubai, with 71,609 animals at various farmhouses and municipal veterinary clinics received treatment and vaccination during the first quarter of the current year. 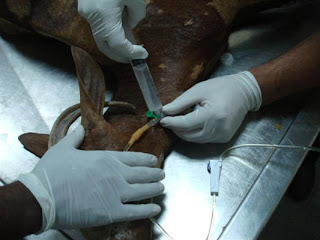 The animal health protective measures have been carried out aimed at ensuring higher level of safety of livestock protecting them from a range of serious seasonal risks eventually derailing the food security in the emirate, revealed Dubai Municipality (DM).
The Municipality has staged a range of programmes and initiatives to ensure that the animal handlers or traders are adhering to the civic regulations and requirements on animal sheltering.
The civic authority also intensified its inspection procedures on cattle feed shipments and veterinary supplies imported through the emirate's ports during this period, aimed at reducing the number of common animal diseases.
Meanwhile, the number of animal feed shipments imported to the emirate has increased this year compared to the first quarter of the last year, as more companies entered into the market in the wake of the increasing demands for animal feed, a spokesperson of the DM said.
According to him, there has been a significant decrease in the number of animal care law violations compared to the first quarter of last year. "The civic veterinary laboratories conducted about 7,477 tests. Also, about 877 random inspections were carried out in different areas of the emirate."
"Surveys on mycotoxins in cow milk were carried out, taking samples from farms for bacterial tests. The Municipality also monitored different tools used for dairy operations to ensure safety and protect public health," the DM official pointed out.
He elaborated that approximately 1919 cases of stray animals like cats and dogs were reported during this period. "About 42,820 animals were examined before slaughtering at Dubai Abattoirs, while a number of animals were rejected prior to the slaughtering as they were unfit for human consumption."
A significant increase has been recorded in the awareness of workers in livestock farms and dairy sites, the DM spokesperson concluded.
(Pic: Supplied)
Posted by PMA RASHEED at 2:44 PM