Showers across UAE on eve of Eid

BY PMA RASHEED
16 Nov 2010, The Gulf Today
A spell of heavy and modest rain, coupled with thunderstorms and hailstorms, lashed different parts of the UAE on the eve of the Eid Al Adha.
Meteorology sources revealed that 4mm of water fell in the emirate of Sharjah as the rains lasted for about two hours in the afternoon on Monday. 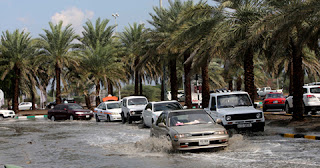 Numerous motorists complained about Sharjah’s traffic situation saying that they were stuck in jams for hours as water clogged many parts of the city.
Retail traders in Rolla and other commercial areas of the emirate also faced disruptions in business due to the sudden climatic change and downpour.
A duty forecaster at Dubai Meteorology office told The Gulf Today that further chances of rain or thunderstorm are unlikely for Eid day.
However, the skies over the mountains will be blanketed by towering clouds with a decrease in temperatures on Tuesday afternoon.
“Slight to moderate winds have also been predicted, which may cause dust or sand blowing over some open-land areas sometimes, thereby reducing horizontal visibility at times. But the sea will be moderate in general, becoming rough at times,” he added.
The weather officer elaborated, “The thunderstorm witnessed in and around the Sharjah Airport and the surrounding areas originated from the mountainous region of the emirate. A hailstorm was also reported in some parts of the emirate during the rain.”
“The downpour continued in border areas of the UAE since morning itself, especially in the areas of Al Ain closer to Oman,” he indicated.
The National Centre for Meteorology and Seismology (NCMS) warned the public to be extremely vigilant while engaging in outdoor activities, which involves risks owing to unstable weather conditions.
“Hazardous weather patterns of exceptional severity are forecast. The public should keep abreast of the weather situation and comply with safety measures.”
“The rain witnessed in parts of Ajman on Monday was heavy and badly affected brisk businesses for the Eid at the central vegetable and meat market of the emirate,” said Saidul Abideen, a foodstuff retailer in the market. 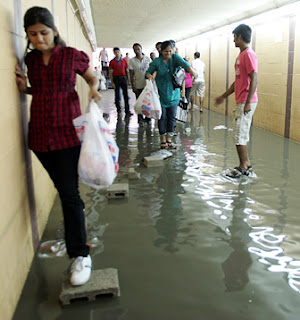 But Qadeer Siddiqui of Salt and Pepper Restaurant in Sharjah said that the impact of the rain for over two hours time had a good result for them. “An unusual rush of customers, who sought shelter at our restaurant, increased the business during the rain.”
According to Shafeek Sha, Eid celebrations could have been badly affected had the rain continued for more than two hours. “Most areas of the city were already clogged in water leaving me worried.”
“Smooth movement of vehicles was affected by the downpour and motorists were forced to face bumper-to-bumper traffic situation for a long time, even though the rain didn’t last long,” he observed.
Rameez R said, “I would have headed out driving for the thrill in the rain, but then again, Sharjah roads fail! I need to get my hands on the four-wheel drive.”
Industrial Engineer Mustafa Yusuf, called it on Twitter, “sweet rain in Sharjah. Although the weather was lovely, the wind was stronger.”
Mariam Ali also tweeted on the heavy rain, lightening and thunder she witnessed on the Sharjah airport road.
Fathima Molly said she woke up to sound of rain for the first time after her family shifted to Sharjah. “The drizzle was amazing over the Buhaira Corniche for me and my kids, husband and sister.”
Another cyber geek responded to the rain as being a respite for the emirate, after two major fire incidents.
(Pic by Prashanth Mukunthan)
Posted by PMA RASHEED at 2:24 PM