About 7 per cent of the total foodstuff warehouses in Dubai have been found to be not adhering to the public health safety and hygiene regulations of Dubai Municipality (DM).
It was revealed after an inspection drive at mass food godowns of the emirate, carried out recently by the civic body to prevent outbreaks of food poisoning cases during the summer, a senior DM official said. 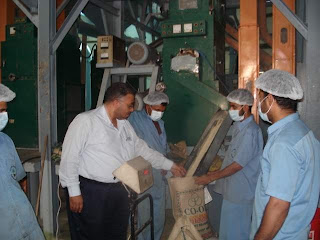 Sultan Al Tahir, the head of Product Control Section in the Food Control Department of the DM, said the campaign covered 257 warehouses of dry, chilled and frozen food items.
“At least 144 foodstuff establishments have been fined for violations, and warned to immediately adhere to the DM’s conditions and modify their status,” he added.
“Among the total inspected warehouses, 18 have received weak assessment marks for poor storage of foods. Most common violations in such premises were regarding preservation of the food items without proper ventilation,” pointed out Tahir.
According to him, each type of food should be stored with appropriate safety measures and suitable temperature to protect them from contamination, as negligence during high humidity and temperature may cause the growth and reproduction of microbes.
“Effective control of the temperature level at the warehouses will reduce the microbes preventing them from multiplying and destroying the foodstuffs,,” explained Tahir.
He said that efficiency of refrigeration and freezing equipment, and availability of alternative modes in case of breakdowns at the warehouses were also monitored.
“The refrigeration units should work at a temperature of 4°C or less, and freezing units at minus 18°C or less. While, the dry food items should be kept at 21°C or less temperature,” he elaborated.
“The health and hygiene of the warehouse workers, validity of the foodstuff, manipulation or fraudulence were also subjected to the inspections,” said Tahir.
Posted by PMA RASHEED at 10:54 AM