BY PMA RASHEED
The Gulf Today, 21 June 2010
The Dubai Municipality is all set to launch a comprehensive awareness campaign, covering all families with lessons on the safe usage of liquid petroleum gas (LPG) cylinders at villas and apartments. 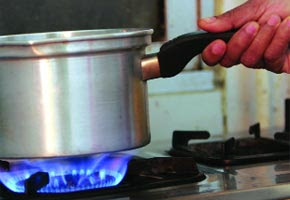 The immediate spark for the fresh safety campaign is said to be an explosion allegedly due to cooking gas leakage in a Mirdiff villa, endangering the lives of four teenage girls, who were admitted to Rashid Hospital in serious conditions, sources revealed.
“Tens of thousands of awareness materials will be distributed at doorsteps by officers from the municipality’s building inspection, public health and safety sections as well as staff from the waste management department,” said the DM source.
According to him, the DM had just completed a safety campaign targeting LPG cylinder distribution agencies, eventually taking punitive actions against about 43 errant establishments for breaching safety regulations.
He said, “The LPG safety inspections are currently being carried out at restaurants and cafeterias in the city, while all the LPG distributors will be again called by the DM for another safety seminar soon.”
Sultan Essa Al Suwaidi, Head of the Public Safety Section in the Public Health and Safety Department of the DM, said that gas leakage is the result of improper flow of the gas from valves, hoses and fittings of the LPG cylinders.
“The establishments that supply and install LPG cylinders should ensure easy and effective maintenance, provided with full security to prevent accidents,” he added.
He gave safety tips to the residential users to avoid incidents of LPG cylinder explosions, “There is a set of safety procedures to avoid gas cylinder blast incidents. The conditions include not opening or closing the gas valve violently and not using devices like hammer for opening and closing the valve.”
“Using lighters and match boxes at gas cylinder storages should be avoided, while checking a gas leak, instead water and soap solutions should be applied to ensure leakages. It’s also advised not to risk life by trying to transfer gas from one cylinder to another as it may lead to a blast,” advised Al Suwaidi.
He said that using a cylinder for purposes like climbing on it to reach a high place or putting so many things over is also restricted. The customers should ensure that there is no flame or open fire while changing the gas cylinders.
“It should also be made sure that there is no flame or any other source of spark while replacing the gas cylinder. Children are prohibited from playing with the cylinder even if it’s empty,” he noted.
“It’s recommended to avoid placing gas cylinders inside the kitchen, instead it could be preferably placed in the balcony. Ensure that both the gas cylinder and the gas cooker valves are closed prior to leaving the house,” pointed out Al Suwaidi.
“The hose connecting cylinder and stove shall be regularly checked for damage that may happen due to exposure to heat and weather conditions. Such hoses with defects must be replaced immediately with standard ones, while attempts to repair them using tape or adhesive material are not entertained,” he explained.
“The hose should not be too long or too short, as long ones may get tangled around the gas cooker or cylinder, while short ones may slip out either from the gas cooker or the cylinder,” he added.
Posted by PMA RASHEED at 9:17 AM