By PMA RASHEED
The Gulf Today, 2 Aug 2010
The civic body in Dubai has instructed marine passengers to Mamzar lagoon to be extra vigilant about the possibilities of life-threatening dangers while using the slipway or boat slip to the area. 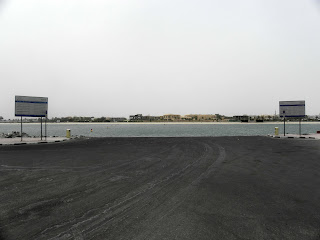 In order to avoid disasters in the sensitive spot, the Dubai Municipality (DM) has strictly prohibited the visitors from exceeding the floating 'No Entry' signs and entering the Mamzar lagoon, according to a senior civic official.
The number of water sports freaks, leisure visitors and tourists thronging the area significantly increases in summer, as they come here to escape the soaring temperatures.
The Municipality has already issued a set of safety measures and called upon all the visitors to take additional personal care and abide by the specified requirements, while venturing into sea water in the area.
Alia Al Harmoudi, the head of the Coastal Zone and Waterways Management Section at the Environment Department of the DM, said the public should use the slipway only as an access to the sea.
“Roaming around in the Mamzar Creek is prohibited. Professional fishing boats are also not allowed to use the slipway,” she added.
"People should also maintain the speed limit in this area not exceeding 5 knots. The parking lot adjacent to the slipway is allocated for parking trailers only on a temporarily basis and using it to park the boat is prohibited," she pointed out.
“The offenders to the municipal regulations will face stringent punitive actions like imposing of hefty fines and other legal measures,” warned Al Harmoudi.
She urged the public to co-operate with the municipality and to adhere to the instructions for their own safety.
“The Al Mamzar slipway had been closed for several years due to a number of abuses committed by the users of jet skis and the boat owners. The municipality re-opened the point for the public later, after setting up certain conditions that govern the use of the slipway,” she elaborated.
“As the Al Mamzar slipway is a major tourist facility that supports leisure activities, tourism and water sports. Owners of yachts and boats are supposed to ride their boats for recreation and sports only,” she pointed out.
According to Al Harmoudi, all the roads and streets leading to the slipway in Al Mamzar carry the signs.
She said, “Two sign boards could be found upon reaching the slipway prohibiting its use.”
“This had created a lot of confusion to the visitors prior to the recent announcement of the municipality on the opening of the slipway and allowing the owners of the marine vehicles to use it,” she added.
Al Harmoudi noted that there are only two slipways in Deira side, one in Al Mamzar and the other in Al Hamriya port.
“The latter being meant exclusively for commercial fishing boats,” she pointed out.
“Prior to the municipality announcement of allowing the public to use the slipway at Mamzar, a large number of practitioners of marine sports and residents in the area of Deira had to travel a long distance to reach Jumeirah or Umm Suqeim,” she elaborated.
In the beginning of the summer season, the Dubai Municipality warns all the beach-goers to be cautious about the heat stress and its symptoms.
During this time of the year, the authorities warn the beachgoers to take extra caution while venturing into sea, as drowning incidents increases significantly.
Posted by PMA RASHEED at 4:18 PM