By PMA RASHEED
The Gulf Today, 31 Aug 2010
A range of fines have been imposed on 161 errant food establishments in various parts of Dubai by the civic body’s food safety inspectors during a recent food inspection drive. 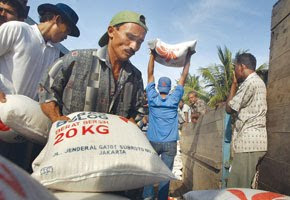 The officers at the food control department of Dubai Municipality (DM) have also issued warnings to at least 78 food traders for violating food safety conditions, according to a senior DM official.
However, Sultan Ali Al Tahir, acting head of the Product Control Section at the DM, said that 94 per cent of the food traders were found to be complying with the hygiene requirements set out by the municipality, during the inspection visits carried out at 239 establishments.
“In the performance-based assessment, there were 57 establishments with “very good” status and 171 were ranked “good”. Only eight weak food outlets, four per cent of the total inspected, earned an average rating during the campaign,” he elaborated.
According to Tahir, the positive results show the achievement of the Municipality’s goal of ensuring health and food safety in the Emirate.
“The intensive monitoring of the foodstuff trading establishments focused on ensuring that the food products are safe and suitable for consumption,” he said.
“The inspection team also imposed fines on 35 violating foodstuff warehouses and issued 56 notices when they conducted 91 visits to such establishments. A total of 6 per cent of food warehouses were found to be not adhering to hygiene regulations, while 94 per cent have obtained good assessment rates,” detailed the product monitoring chief.
“The most common irregularities at the warehouses were lack of proper cleanliness, improper storage methods and capacity, accumulation of excess items, and less ventilation and light, and lack of health cards or expiry of the workers,” he said.
According to Tahir, the warehouses are the primary branch of the food establishments, and food safety in these establishments will have impact on most of the segments of society.
“Food-borne diseases and the damage resulted from it must be upsetting, but it may be fatal too. There are also many other outcomes that may result from eating unhealthy food that is unfit for consumption,” he pointed out.
“The food safety campaign also inspected cooperative stores and hypermarkets to ascertain their compliance with the hygiene requirements, focusing on products that are in great demand during the holy month,” said Tahir.
“The extent of their commitment to the conditions of storage, cleaning and application of personnel commitment to these requirements were checked,” he added.
“The DM had been working on the inspection procedures two weeks before the beginning of the Holy Month of Ramadan, by setting up a special task force that had a face-to-face session with numerous food traders. The campaign lasted for two weeks during the Ramadan,” elaborated Tahir.
(Photo used for illustrative purpose)
Posted by PMA RASHEED at 3:08 PM