‘Carriers of Thalassemia disease can go up to 1m in UAE’

By PMA RASHEED
19 April 2011, The Gulf Today
Dubai: The number of carriers of the genetic disease thalassemia in the UAE may go up to 1 million, revealed a senior health official on Monday.
Dr Khawla Belhoul, director of the Thalassemia Centre of Dubai Health Authority (DHA), said that approximately 600,000 people in the Emirates are carriers of the disease.
According to him, the number of patients may increase with the continuous influx of people from other countries, which are at high risk of the disease. 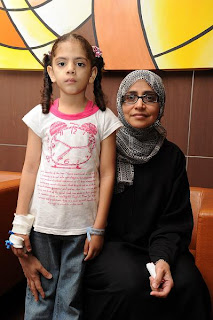 Thalassemia is a blood disorder that reduces the number of normal blood cells in the body. If two carriers have children, the likelihood of each child developing the disease is 25 per cent.
“Thalassemic patients are hooked on to blood for survival. They need regular, lifelong transfusions of blood. For thalassemia patients, blood is the most important resource, to ensure their survival. All the members of the society should come forward to donate and help save the lives of thousands of patients,” urged Dr Belhoul.
She was speaking to the media at a five-day awareness campaign, to mark World Thalassemia Day 2011, which falls on May 8.
According to her, the number of thalassemic patients in our society speaks volumes about the prevalence of this condition and thus such initiatives are vital to educate our community and reach out to them.
“In the UAE, one in 12 people carry the gene for thalassemia. Around 40 per cent of the patients at the Dubai Thalassemia Centre are Emiratis. Another 40 per cent are expatriates from Asian and African countries, while the other 20 per cent of thalassemic patients are Arab nationals,” elaborated Dr Belhoul.
“Geographically speaking, South Middle East, Mediterranean and Asian countries are at the highest risks of the condition. The rates of prevalence of the genetic disease vary from six to 12 to even 16 per cent in the countries,” she said.
The Dubai Thalassemia Centre is the Emirate’s only dedicated facility to manage this condition by providing internationally recognised levels of care in chronic disease management for thalassemic patients.
“About 420 patients receive regular treatment and blood transfusions at the centre,” noted Dr Belhoul, “Each patient requires approximately 34 units of blood annually through an average 17 transfusions. However, additional units of blood may be required depending on the patient’s condition. We also receive extra patients who visit the centre for transfusions from time to time.”
“Education of patients, family members and the public in general, is a key part of chronic disease management and we at the centre strongly advocate the importance of such campaigns and initiatives which provide the public information and well as give them an opportunity to ask questions about the disease,” she added.
Khalid Al Sheikh Mubarak, deputy director general at the DHA, said the efforts of the authority are towards reducing the prevalence of Thalassemia in the society.
“The DHA will send eight thalassemic patients to Turkey for a holiday trip as part of the campaign to support them. Patients above the age of 18 will fly to Turkey on the April 22, along with two nurses from the thalassemia centre,” he added.
According to him, the trip will provide them with recreational activities to break the monotony of regular treatments, which they need to undergo.
After this campaign, staff members and patients from the centre will head to the 14th TIF (Thalassemia International Federation) international conference for patients and parents, which will take place in Turkey from May 11 to 14.
Posted by PMA RASHEED at 7:33 PM