1 April 2011, The Gulf Today
A pack of juvenile Hawksbill turtles trapped in heavy sea waste on the shores of Dubai was rescued recently by the marine inspectors of Dubai Municipality (DM).
When the inspectors found the 11 young aquatic species, sized three to five inches and weighing 50 to 150 grams, they were suffering from malnutrition as they had been covered by different types of sea waste materials with their movement hindered. 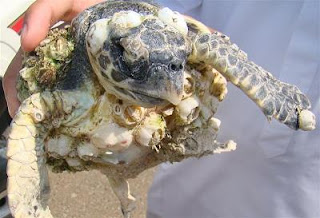 Mohammed AbdulRahman Hassan, head of the marine environment and wildlife section at the DM, said the highly migratory species of turtles will be released back into their habitat, after carrying out necessary scientific tests on them and providing with required rehabilitation at a specialised centre in the emirate.
“The Hawksbill sea turtles travel through the oceans of the world frequently and this migratory behaviour has made it harder for policymakers to make laws to stop hunting them,” he added.
“It is quite hard to enforce the law to save the hawksbill turtles. As they migrate often, they have become shared resources among nations. If one country makes law to save the hawksbill sea turtles another country hunts them. This situation has given poachers the chance to hunt and trade them, resulting in their rapid extinction”, pointed out Hassan.
He urged fishermen and beachgoers to strictly adhere to the civic body’s environment protection regulations, so as to preserve this threatened marine species. We should be aware of our environment and its elements.
“Nesting places of the turtles on beaches should not be exposed or destructed. We want the people to report such incidents in order to send them back to their natural habitat,” he said.
“Many animal organisations are trying to take initiatives to save these beautiful creatures, as their migratory behaviour has made them more vulnerable. But all their moves are not being successful due to many reasons, due to the lack of human awareness,” he pointed out.
“The hawksbill sea turtles are being protected by different international laws and treaties. They have been enlisted in Appendix I of the CITES (Convention on International Trade in Endangered Species of Wild Flora and Fauna) which has made any kind of trade of this species illegal,” Hasssan elaborated. 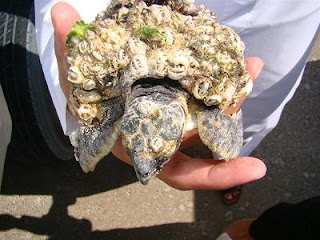 “The International Union for Conservation of Nature (IUCN) has classified the hawksbill turtles as critically endangered species. The Convention of Migratory Species (CMS) has also enlisted them in Appendices I and II to protect them,” he added.
According to him, all these regulations and treaties would not be able to save the hawksbill sea turtles until and unless these are enforced properly. “It’s not always possible due to many deficiencies. However, we have many other things to do to save this species. Awareness should be raised to keep the ecological balance.”
(Pic: Supplied)
Posted by PMA RASHEED at 10:48 AM