67 drugs to go cheaper from July

30 March 2011, The Gulf Today
Prices of as many as 67 medicines have been decreased by five per cent to 40 per cent by three major drug manufactures in the UAE, announced the Ministry of Health (MoH).
The price reduction comes into effect following a study undertaken by a MoH-formed special committee, whose findings had revealed that the prices of medicines, which prevailed in the UAE, were the highest in the region. 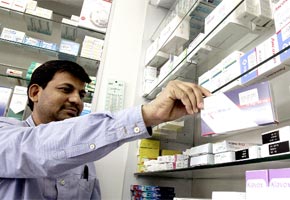 Dr Hanif Hassan Ali Al Qassim, the Minister of Health has signed a ministerial decision to approve the new drugs price list, which will come into effect from the beginning of July at all private pharmacies in the UAE.
The announcement was made during the inauguration of Pfizer’s new regional headquarters in Dubai Media City on Tuesday.
Dr Amin Al Amiri, assistant undersecretary for Medical Practices and Licences at the MoH, said, “The pharmaceutical manufacturers Pfizer International, Merck Sharp and Dhome have already reduced their prices of widely-used medicines for a range of diseases including blood pressure, cholesterol, prostate hypertrophy, epilepsy, depression and schizophrenia.”
“Another 20 international pharmaceutical companies are expected to follow suit soon and reduce their prices,” said Dr Amiri, adding, “Other drugs in the revised price list included antibiotics, steroids, antifungal and analgesics.”
According to him, the three drug manufactures responded to the initiatives of the health ministry to elicit the co-operation of the public and private sectors in reducing medicine prices.
Dr Salem Al Darmaki, acting undersecretary at the MoH, noted the health ministry will develop more social partnerships aimed at raising the standards of medical treatment services at reasonable costs that match the residents’ purchasing capacity and living standards, but without financially affecting the service providers.
(Pic used for illustrative purpose only)
Posted by PMA RASHEED at 12:19 PM