26 March 2011, The Gulf Today
Iconic landmarks, residents, government departments and various organisations in the UAE will join millions across the world on Saturday in marking the largest action for the planet, Earth Hour 2011, by switching off electric lights for an hour from 8.30pm. 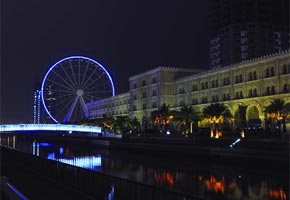 This year, the global lights-out event has reached record participation, with 131 countries and territories registered to take part, on all seven continents.
Activists and public figures in the UAE have urged the public to show their support for the planet in many ways, whether they are individuals, businesses or schools. “You can start by signing up and joining the Earth Hour movement in the UAE, or can create your own Earth Hour event.”
Various public events have been planned to mark the time when iconic landmarks across the emirates, including Burj Khalifa in Dubai and Sheikh Zayed Grand Mosque in Abu Dhabi will go dark in solidarity with the world’s largest environmental call for action on climate change.
This year the Earth Hour urges individuals, governments and other organisations to “Go Beyond the Hour” by committing to enduring actions, big or small, that they will sustain for the future of our planet.
The Emirates Wildlife Society (EWS), in tandem with the World Wildlife Federation (WWF), will run the campaign to showcase a long-term commitment to evolve beyond switching off the lights for an hour.
A spokesperson of the EWS-WWF said the list of landmarks participating in the global switch-off event and number of participants in the UAE is record breaking this year. More than 200 companies have signed up, most of whom pledged to go beyond the hour.
The EWS-WWF called for all UAE residents to take action and get involved with events set to take place across Abu Dhabi, Dubai, Sharjah, Fujairah and other emirates.
“The public events planned across the emirates included programmes at Abu Dhabi Corniche Beaches, Dubai Festival City celebrations at the Marina, Burj Khalifa Earth Hour switch-off celebration and bazaar at Burj Plaza, porgrammes at Al Qasba in Sharjah and Earth Hour gathering at the Fujairah Fort,” said the EWS-WWF official.
On the occasion of Earth Hour 2011, Dr Rashid Ahmed bin Fahad, the UAE Minister of Environment and Water (MoEW), commented, “The growing participation of the UAE residents and organisations in the movement indicates the higher level of awareness in the community to protect the environment and achieve sustainable development.”
“We should achieve sustainable development for us and the future generations. Simple changes in the pattern of our lives can reduce our carbon footprint, save our precious natural resources, and contribute to making the planet a better place to live,” he added.
Ida Tillisch, acting director general of EWS-WWF, said, that the “Going beyond the hour” programme calls for daily actions that incorporate environmentally sustainable practices into one’s lifestyle, and into the corporate sector.


Sharjah
In Sharjah, all non-essential lights will be switched off at the popular entertainment destination Al Qasba and Etisalat building during the hour. An array of educational fun activities will be hosted at Sharjah Aquarium and Maritime Museum outdoor area between 5 to 9.30pm.
In anticipation of the Earth Hour, the Sharjah’s official environmental establishment Bee’ah is calling upon the residents to recycle household waste on a regular basis which will help conserve energy long after the Earth Hour is forgotten.
Khaled Al Huraimel, Chief Executive Officer of Bee’ah, commented that residents can drop their recyclable household waste items such as paper, plastics, aluminium cans and plastic at the central temporary collection point set up at Al Qasba.
“The Bee’ah will then quantify the energy saved by recycling these items. The effort will contribute to conserving even more energy via recycling, and not just by turning off the lights for one hour,” he added.
Abu Dhabi
The Municipality of Abu Dhabi City hosts the Earth Hour on the 30th Street of the Cornice Road. The programme scheduled to start at 6.45pm with a lantern walk with Abu Dhabi EcoChicks at beach parking area near Hilton Hotel; followed by ‘Drum up support for Earth Hour’ by Dubai Drums Community, light bulbs exchange programme and musical performance.
“The celebrations will be kicked off at 06.45pm by a candle-lit rally starting off ADNOC refueling station (Beach visitor car park) at Abu Dhabi Corniche to Al Saahel Square beside the Formal Park, accompanied by a military and police band parades as well as drum teams as part of a host of community events,” said the municipality.
The civic body will switch off lights at its head quarters in Al Salam Street as well as at the municipal external centres at Al Bateen, Al Shahama, Al Wathba, Al Zaafraneh and Al Musaffah.
Dubai
In Dubai, the Burj Khalifa programme will witness traditional bazaar with cooking stations and handicrafts at Burj Khalifa Plaza at 5pm. The lantern march, hosted by DEWA, will be staged between 8.30pm to 9.30pm. The festival city will host school art exhibition and competition at DFC Atrium, candle light and floating lantern celebration for the planet, entertainment at DFC Marina, and candlelight dinners at DFC dining venues.
Two digital cameras and printer will be presented to the winning Earth Hour photos posted on EWS-WWF Facebook page, while two laptop computers are waiting the winners of the school-aged children participating at the DFC exhibition.
The ship repair entity Drydocks World will observe the Earth Hour, said its chairman Khamis Juma Buamim, “The programme could help us in power savings of up to 10,800KWH at the Dubai yard.”
“Supporting the global consciousness drive for the preservation and responsible consumption of our natural resources, du will switch off electricity in its facilities in Dubai Outsource Zone, Dubai Academic City 8 & 9, Al Salam and Lotus between 8.30pm and 9.30pm,” said Hala Badri, EVP Brand and Communications at du.
Fujairah
Starting from 7pm Kamal Musalam will perform modern Arabic Music at a gathering near Fujairah Fort, which will switch off lights and candle lanterns will float into the air until 9.30pm.
“There’s more to it than switching off lights for one hour once a year. It’s all about giving people a voice and working together to create a better future,” remarked Ida Tillisch.
“More governmental policies should be developed for the conservation of environment and regulations for effective energy saving in the country. Together we can achieve the meaningful emission reduction necessary to fight climate change,” opined the environmental activist.
“The EWS-WWF programme will give lessons to individuals on going beyond the hour with simple daily actions such as setting air-conditioners to 24 instead of 22 degrees, washing cars with a bucket instead of using a hose, and switching lights to high efficiency bulbs,” she added.
(Pix Supplied)
Posted by PMA RASHEED at 12:55 PM