24 March 2011, The Gulf Today
The residents of the UAE can now enjoy potatoes grown locally in the farms of the country’s Western Region, thanks to the initiatives of the Farmers’ Services Centre in Abu Dhabi (FSC) to introduce potato crops in the desert. 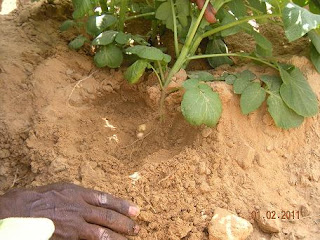 After a successful growing season during the cooler months, farmers are now harvesting up to 25 tonnes every day, with an estimated total harvest of 2,000 tonnes, say officials at the FSC.
Chris Hirst, chief executive officer of the FSC, said the first harvest of large, medium and locally grown salad potatoes, grown on Abu Dhabi farms in much the same way as other field crops, will arrive in stores across the country soon.
“The FSC distributed 150 tonnes of seed potatoes earlier this year to 350 farms in the Western Region under a credit agreement that allows farmers to pay for the seed after the crops have been harvested and marketed,” he added.
“The centre provided training and support to farmers for potato production,” Hirst noted.
According to him, the FSC plans to cultivate more water-efficient vegetables that will improve local food security and efficiency of agricultural water use.
“While traditionally seen as a water intensive crop, potatoes offer long-term food security as well as food production efficiency. The potatoes are surprisingly more effective in terms of food production compared with fodder crops and other vegetables,” he elaborated.
“For every litre of water consumed, potatoes produce one kilocalorie of energy compared to crops such as wheat, which requires double amount of water to generate the same amount of energy,” Hirst pointed out.
"In addition, the storage potential of potatoes make them a valuable product in increasing local food security, notably in a year when water shortages and inclement weather are likely to impact crops in the traditional supply markets of Europe and Saudi Arabia,” he added.
“The most efficient and appropriate strategies are being developed for farming production. Potatoes are well-suited to the UAE’s environment and consumption habits, fitting with our strategic aim to create a holistic, market-driven agricultural sector,” Hirst said.
“The FSC aims to improve the sustainability of the emirate’s agricultural sector, reduce water use, improve the quality of local produce, enhance national food security and ensure a fair income for farmers. It will be launching a brand for high-quality, locally-grown vegetables in 2011.” 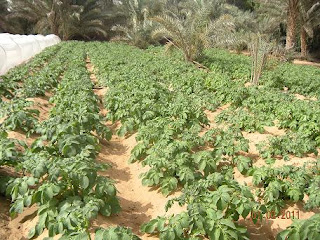 “Potatoes are similar to most open field vegetable crops grown in the Western Region. They are planted as specially produced seed potatoes from mid-September to mid-January. They require irrigation, which is supplied though dripper pipes placed in the plant rows. They are produced using an integrated system, which uses a combination of water, fertilizer and other agro chemicals,” explained Hirst.
“They can be produced from 90 to 120 days depending on varieties of planting to harvesting. After harvest they can be sold fresh or stored for prolonged periods and released when the market requires them,” he concluded.
(Images: Supplied)
Posted by PMA RASHEED at 1:40 PM