‘Food prices may increase at 10% this year’

By PMA RASHEED
1 March 2011, The Gulf Today
The prices of food items in the UAE might further shoot up this year at an estimated rate of 10 per cent, if necessary strategic measures and policies haven’t been implemented on a strong platform to ensure food security and sufficient stocks in the market, warns a top player in the industry. 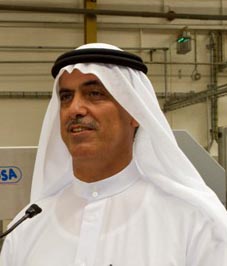 The food sector in the Gulf region is facing extremely critical challenges in terms of escalating prices, coupled with the mounting issues on food security and availability of sufficient foodstuff stocks, chairman of Al Ghurair Foods Essa Abdulla Al Ghurair said.
“Prices of grains have been constantly affected by the mounting prices of crude oil in the international markets. The food shortage indications should inspire governments to implement strategic measures to ensure food security,” he added.
“We can expect a better crop harvest season this year to boost our food storage and ensure the food security, unless there’s a drought as happened in Russia last year or the heavy rains flooded the Australia fields,” he added.
While talking on the sidelines of Gulfood 2011, the boss of Al Ghurair Foods expressed his concerns over the political implications for the shortage of food stock and increase in prices.
“We have been implementing numerous projects by enhancing its capacity to ensure sufficient food security in the UAE and the region, in addition to encouraging a healthy and active lifestyle within the region,” he elaborated.
The region’s giant player in the food sector also has recently reopened its canola crushing plant in Jebel Ali, the largest of its seed crushing unit in the Mena region. The present product portfolio of Al Ghurair Foods includes flour, edible oils, pasta, grains, oats and poultry.
Essa indicated, “The facility will increase the group’s production capacity of canola oil up to 4,500 tonnes daily, which was 3,000 tonnes earlier, in addition to a soya crushing capacity of 2000 tonnes.”
“A new wheat storage facility is being developed by Al Ghurair Foods, the region’s pioneer player in the food sector, in tandem with the government of the UAE,” he said.
“The massive storage facility will be unveiled within a couple of years. Al Ghurair’s 300,000-tonne-capacity silos have been allotted to the government’s strategic food reserves until the project is finished,” Essa added.
“The group has plans to widen its GCC reach and expand operations to more Middle Eastern and North African countries. In the near future, we plan to venture out with more projects in Saudi Arabia, by establishing plants capable of crushing 4000 tonnes of Soya bean and 3000 tonnes of canola per day.”
“Other projects in pipeline include launching of a new product and expansion programmes in the North African region. The new wheat silo in Algeria has a storage capacity of 140,000 tonnes. The project has already been commissioned and the loading and unloading of ships will begin very shortly.”
Al Ghurair Foods, the only private sector food manufacturer in the UAE, shares about 35 per cent of the UAE’s flour market and 20 per cent of the animal feed products.
Posted by PMA RASHEED at 8:13 PM