Thousands join Earth Hour 2011 activities in UAE
By PMA RASHEED
27 March 2011, The Gulf Today
Despite the disruptive climatic conditions that restrained the normal pace of life in the UAE on Saturday, thousands of residents congregated at hundreds of outdoor venues across the seven emirates for the world’s largest civil action on climate change- Earth Hour 2011. 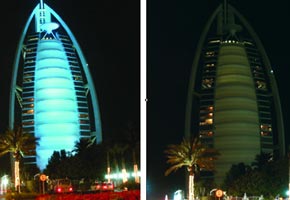 Sandstorms curtained the UAE’s iconic landmarks’ visibility during the day, while the darkness draped the popular attractions at night between 8.30pm and 9.30pm, joining the global action towards a sustainable future.
The UAE residents from every walk of life, in communities large and small, symbolically dimmed lights in their residential premises on Saturday evening, in solidarity with hundreds of millions of people around the world.
Sheikh Zayed Grand Mosque in Abu Dhabi — the resting place of the UAE’s founding father, and the tallest manmade structure in the world Burj Khalifa temporarily went dark during the hour, in addition to hundreds of other landmarks and residential premises across the UAE.
Showing solidarity with activists across the globe on a mission to raise awareness on keeping the earth sustainable, scores of people in the UAE gathered in parks, streets, town squares and homes and witnessed the lights going out on iconic landmarks and city skylines. They captured the moments of the Earth Hour on videos or still cameras, and pledged to conserve energy for the future.
Patron of the Earth Hour in the UAE, the Emirates Wildlife Society (EWS-WWF) said the participation from the UAE government and private sectors and social organisations exceeded that of the last year. “The most significant message this Earth Hour observation spreads is the importance of using natural light, instead of artificial light by letting the sunshine in where there are windows,” said Ida Tillich, acting director general of EWS-WWF.
“It was all about giving people a voice and working together to create a better future. The people stood up to take responsibility to protect the environment, turning off all lights along with hundreds of million people across the world,” she added.
“Residents of the seven emirates expressed their commitment to Earth Hour by demonstrating action for the environment and sharing messages with the rest of the community. The campaign will continue to showcase a long-term commitment to evolve beyond switching off the lights for an hour,” Tillich remarked.
“We received immense support from government institutions, businesses and individuals throughout several emirates. The list of UAE landmarks took part in this global climate event included dozens of organizations across the emirates,” she noted.
According to her, observation of the cause turned out to be an excellent example of how the private sector, the government, educators and communities could work together with to strengthen and advance the awareness of our country on environmental issues.
Hind Ahmed Shaker, Director of Government Communications at the Ministry of Environment and Water, said the observation of the Earth Hour should inspire us to reduce our energy use. “It’s the contemplation of the one thing we all have in common - our planet. “The Earth Hour is about the responsibility that all of us have in protecting our environment,” she added.
Sameera Fernandes, a communications professional in Dubai, said the UAE has one of the highest ecological footprints per capita, so our role in addressing what is unequivocally the greatest threat to the planet today is absolutely vital.
“The Earth Hour encourages individuals, commercial establishments and government institutions to demonstrate their leadership on environmental solutions through actions,” she added.
Saeed Al Tayer, Managing Director and CEO of Dubai Electricity and Water Authority (DEWA), hailed said the solidarity of all residents in Dubai to shut down lights and unnecessary electric goods during the earth hour.
He advised the residents to continue the passion and spirit of conservation which they showed during the event by going beyond the Earth Hour and make a pledge, large or small, to preserve natural resources in their daily lives.
“The DEWA was the first institution to support Earth Hour since 2008. The authority has been implementing various programmes to educate its customers and the community on the responsible use of electricity and water, conservation of the environment and the protection of our planet,” noted Al Tayer.
Ahmad Al Matrooshi, Managing Director of Emaar Properties talked about participation of Emaar in the Earth Hour prgramme, “The Earth Hour is one of the key sustainability initiatives that we undertake across our communities to further strengthen awareness on climate change, while at the same time driving the participatory action of our residents. “The participation of our communities will contribute to tangible energy gains in addition to encouraging people to be more judicious about energy use.”
(Pix by Nisham A Manaf)
Posted by PMA RASHEED at 2:49 AM