By PMA RASHEED
The Gulf Today, 12 July 2010
Authorities have rejected 20 per cent of the total 99,019 foodstuff shipments that arrived at the port of Dubai during the past six months. 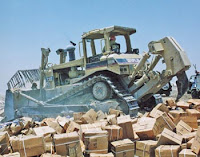 Iman Ali Al Bastaki, Head of the Food Trade Unit at the DM, said that 93,879 food shipments were released after procedures of public health safety monitoring, while 7,840 shipments were rejected due to non-compliance with the municipal condition on food safety.

“Among the rejected shipments of foods, 386 were meant for re-export purpose. Food items of at least 647 shipments have been destroyed as the items were spoilt and damaged,” she added.

“The food shipments were rejected, as the importers didn’t adhere to the regulations on public health safety, and some others violated food labeling laws, while others imported the foods without a food trade license,” pointed out Al Bastaki.

“The DM has completed registration of more than 160 food items through an integrated online system for control of food imports. No unregistered food items are allowed to sell in the Emirate. The Municipality has started applying the standard new law on food labeling,” she noted.

According to her, the food consignments are not accepted if unlicensed companies practise food trading activities by importing food items from other countries. The DM also rejects shipments that violate the food label regulations approved by the competent authorities or the rules of import.

“Foodstuff importing companies should have facilities like storerooms that comply with the civic bodies rules and regulations regarding the safety of public health. The food control body at DM plays a significant role in controlling the entire foodstuffs imported in the emirate all around the year,” she elaborated.

Bastaki said, “The foodstuff imported for selling in the emirate should not contain harmful colours which are banned due to their adverse effects on human health. All the food items are made available to consumers after undergoing international standard quality control specifications. Unchecked items are not traded in the country.”

She pointed out, “The municipality registers all types of imported food items using an advanced global electronic system used all over the world. The system ensures safety of public health as stringent measures have been applied for permission of sales of the imported food items inside the UAE. Similar procedures are applied on food items produced locally.”

“Regulations as per the latest food quality verification standards have been applied by the DM. Clauses regarding the food label and expiry date information have to be included as per the new law approved by the Gulf Standards Authority, as well as the laws outlined by the authorities concerned in the UAE,” she said.
Posted by PMA RASHEED at 1:52 AM