By PMA RASHEED
The Gulf Today, 16 July 2010
In what they claimed was a message against cruelty to animals, a small group of activists staged a brief demonstration in front of Dubai Zoo on Thursday under a merciless sun at 1pm. 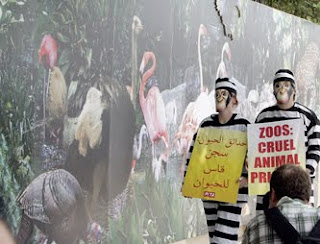 Clad in the suits of prison inmates and wearing chimpanzee masks, Jason Baker and Ashley Fruno silently marched to the front gate taking a round of the zoo’s wall. The placards they held read, “Zoos: cruel animal prisons,” in both Arabic and English.
The activists of PETA — People for the Ethical Treatment of Animals Asia Pacific — flew into to spread the message on the anguish of animals inhabited in zoos by showcasing a demonstration at the entrance of the Dubai Zoo.
Police officials swiftly stopped the demonstration as the activists and their two local supporters, Sangeetha and Sandhya, congregated “without permission from the police or the civic body.” The activists were asked to move away immediately from the vicinity of the zoo.
American Baker and Canadian Fruno landed in from on Wednesday with the mission of conducting the protest for animal rights, and will leave the city on Friday.
Col. Abdulla Ali Abdulla Al Ghithi, Deputy Director of Protective Department and Security of Dubai Police, said, “The programme has been organised illegally. These kinds of private congregations in the name of activism for animal rights are not allowed against a government run-organisation, according to the country’s laws and rules pertaining to public security.”
“No resident or visitor to the country is allowed to create hindrances to the public and their safe movements and activities in a public place,” he pointed out. 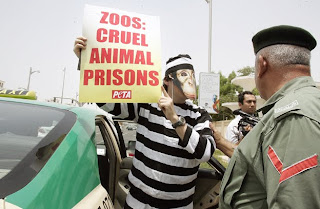 “The Dubai Zoo is a destination for the residents for entertainment and recreation. It’s operated by Dubai Municipality (DM), which ensures environmental and health safety of global standards to the animals kept in the premise,” added Al Ghithi.
Meanwhile, Fruno told The Gulf Today that the Peta wanted to conduct a peaceful demonstration aimed at raising awareness on animal rights and cruelty against them at zoos, but permission was not granted when we approached the authorities concerned.
“We staged a small demonstration in front of the zoo, even though the Peta has a total of 3,000 supporters across the UAE,” she claimed.
According to her, they wore the monkey mask to highlight the plight of Jojo, the lonely chimpanzee at Dubai Zoo, which has frequently come under fire for housing animals in decrepit and barren enclosures. The Peta philosophy is that animals in zoos are subjected to lifetimes of boredom, misery and loneliness.
“Confined or isolated from others of their own kind, the animals often exhibit signs of psychological distress like rocking, swaying or pacing in circles,” remarked Peta Director Jason Baker. 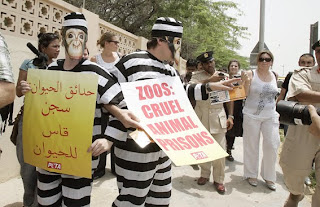 According to him, zoo visitors learn nothing about wildlife from the bored and unhappy animals that exhibit stereotype behaviour.
“Some animals roam many kilometres a day — activity that is essential to their wellbeing — but the entire Dubai Zoo measures only 0.02 square kilometres,” he said.
“The best way to support the conservation of wild animals is to protest their native habitats, not put them behind bars. Being trapped in a cage or other barren enclosure tantamounts to a life sentence for animals — with no chance for parole,” noted Baker.
The Dubai Municipality (DM) officials were unavailable for comment on the Peta protest on Thursday.
(Image Credit: Nisham A. Manaf)
Posted by PMA RASHEED at 3:30 AM