By PMA RASHEED
The Gulf Today, 9 Sept 2010
ON the advent of Eid Al Fitr, the civic authorities in have intensified surveillance of various food production and selling establishments across the emirate. 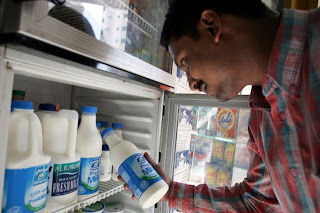 Inspection visits are being carried out at the food production units and retail or wholesale outlets of all kinds of food products to ensure their safety for human consumption during the Eid celebration days, said a senior DM official.
The inspections concentrate on the establishments trading in food products, especially during the month of Ramadan, as there is increased demand for food during the Eid celebrations.
Sultan Ali Tahir, head of the animal products control section at the food control department of the DM, said, "The monitoring procedures are being conducted at establishments of confectionery, bakery and dairy products as well as fruits and vegetable markets, and supermarkets."
According to him, the inspection campaign will make sure the foods meet the health safety requirements of the Municipality.
"The inspectors are focusing on the types of food establishments, sweets and chocolate factories that supply the products in the emirate, which are having higher demands during the Eid time. The fruits and vegetables market and supermarkets also witness increased influx of consumers before the Eid," elaborated Tahir.
"Inspections at factories of bread, pastry and desserts is significant, as the demand for such products stand at the highest during the Eid holidays. Such items can easily be affected with fungus and their bulk production may cause them to rot if they are [stored unsafely]," he added.
"The management of such establishments should reduce the factors that lead to contamination of the food products due to fungus that spread in the air and their surfaces," he said.
"They should ensure that the foodstuff reach the consumer intact as it is the people's right to expect that the food they eat is safe and suitable for consumption," he added.
Tahir said that the safety of storage capacity, proper cleaning and safe transportation of the foods are the main conditions to be adhered by the manufactures of items to ensure the safety of the consumers' health.
"The dairy products are considered more vulnerable to damage if they are not stored with safe methods and in proper temperature, as the higher humidity and temperature can cause multiplication of microbes," he added.
"The inspection team monitor several offences including non-compliance with the hygiene rules, and validity of the workers health cards," he noted.
"Food-borne diseases and the damage results from it must be upsetting, but it may be fatal too. There are also many other outcomes that may result from eating unhealthy food or food that is unfit for consumption," he pointed out.
"Availability of prohibited food items or foods with harmful ingredients are also being checked by the inspectors. Such foods will be confiscated and destroyed immediately," he pointed out.
"Poor storage or display of the foodstuff, on which the sunlight falls directly or wrong practices by the workers in handling the food are also punishable offences," said Tahir.
The Ramadan food inspection campaign of the DM had shown that 4 per cent of food establishments in are non-compliant. At least 161 fines were issued to erring food establishments, and notices were issued to 78 firms that time.
(Pic used for illustrative purpose)
Posted by PMA RASHEED at 11:35 PM