25 Sept 2010, The Gulf Today
COLDWATER coral, unknown for centuries, was a close-kept Icelandic secret. For the island nation nestling in the North Atlantic, it has been a perennial question of survival. Scientists believe that global warming over the decades led to a transpolar Arctic drift and the change in sea temperatures led to a bleaching of the corals in Icelandic waters.

To replicate the beauty of coldwater corals, a new world of artificial cold water corals has been recreated from the waters of the Arabian Sea along the coast of Jazirat Al Hamra in Ras Al Khaimah.
What’s more, a clan of replica Penguins also survived the journey from the Arctic Zone to the Arabian Desert, to set up a new home at the Ice Land Water Park. The Ice Land Water Park boasts the world’s largest manmade waterfall and rain dance pool and sits plump in the middle of the Gulf desert.
Inspired by the phenomenon of the global warming, the water park has been architected as a new home for the penguins along the coastal waters of the Arabian Sea.
On an escapade to the snow-clad mountainous structures resembling Icelandic topography, you will meet hundreds of penguin warriors, always on alert, strategically positioned high on the mountains. They appear to be ready to defend their homeland from an enemy invasion from the seas.
Melting glaciers and tidal waters found their way to the low lands and the mountain stream is tamed into a Lazy River, wonderfully showcased at the extensively themed-park, which has been spread over an area of 110,000 square metres. 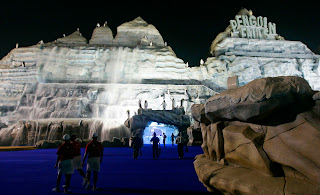 The Ice Land Water Park, which affords a panoramic view of the Al Hajar Mountains in the east and the Arabian Gulf in the north, is managed by Polo RAK Amusement, a joint venture between India’s Polo Amusement Group and RAK Properties PJSC and RAK Investment Authority.
Mohammed Sultan Al Qadi, Managing Director and CEO of RAK Properties PJSC, said, “The brilliant family entertainment destination, opening its doors to the public on Sept.29, is part of the 125-acre WOW RAK theme park and resort destination in the Emirate.”
“Families and theme-park enthusiasts from all over the UAE and the rest of the region have in store an excellent mix of traditional and unique water attractions and slides,” he added.
The Penguin Falls located at the entrance of the park becomes the world’s largest manmade waterfall, as it stands 120 feet tall and 540 feet wide with 100,000 gallons of water cascading down its contours each minute, says Balwant Singh, Managing Director of the Polo RAK Amusement and the master brain behind the project.
According to him, the enduring guest experiences at the park distinguish it from other such water park facilities around the world.
“The facility has been designed to accommodate over 12,500 guests daily, with more than 50 exhilarating water attractions and water slides,” he added.
“We will offer guest experiences with segmental appeal to tap a wider range of age, lifestyle and culture groups. The Kids Cove at the park is a dedicated place for toddlers, primarily because children and toddlers are often overlooked in facility planning of other water parks,” elaborated Singh. 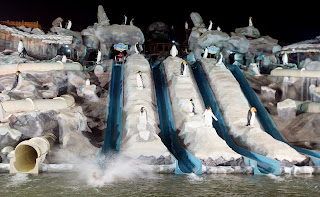 Santosh Chawla, Joint Managing Director of the Polo RAK Amusement, said, the venue will host special parties, focusing on community gatherings such as celebration of national days for expatriate segments of all nationalities residing in the UAE.
“There is certainly something for everybody to enjoy and appreciate. Families or community groups can greatly indulge in a unique and wonderful festive ambience,” he added.
Chawla pointed out that the themed-park has been designed to be eco-friendly as it is equipped with two water recycling plants that will recycle water to be used for horticulture purposes.
“It’s equipped with a full set of in-house utilities, including 4 megawatt power generators, a water desalination plant capable of producing 525,000 gallons a day and water filtration systems to maintain the four million gallons of pool water, to ensure uninterrupted enjoyment to the visitors,” he added.
Singh, said, “The Penguin Bay, an interactive water play area, is the largest rain dance pool in the world measuring 30,000 sq feet and offering shaded discos, open discos, rain showers and the “Rock Hoppers Den,” a stage with acoustics and theatre lighting for pulsating performances. Rain dance and on-the-spot contests would be a regular feature of the Penguin Bay.” 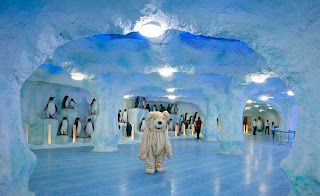 “The Aqua Games at the facility is a regular-size soccer field with soft turf, shallow water and rain showers to offer a unique soccer experience. Meanwhile, at the manmade Coral Reef, enthusiasts can enjoy a real-life snorkeling experience complete with live fish,” he added.
“Other attractions include the spas and Jacuzzis amenity — the “Tundra Baths” with therapeutic powers of hydro massage; “Kids Cove” for toddlers, and a “Slide Zone” with 24 water slides emerging from five towers from heights of up to 110 feet,” Singh added.
(Pix by Nisham A. Manaf)
http://www.gulftoday.ae/portal/46b46814-04d5-49bd-811e-7e5c3661f4cc.aspx
Posted by PMA RASHEED at 2:50 PM