The UAE hosts the largest group of Arabian Oryx in the world today. The country’s wild life wealth can boast of with over 4,000 numbers of the Oryx species, according to a statistics revealed by Abu Dhabi Environment Agency (EAD).
“In an initiative to reintroduce the Arabian Oryx into their natural habitat, the UAE has released 20 Arabian Oryx, including 8 males 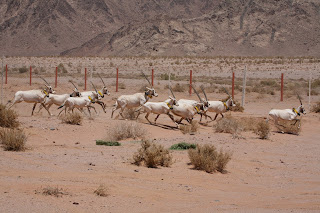 and 12 females, to Jordan’s Wadi Rum nature reserve on Wednesday on Wednesday,” said Mohammed Ahmed Al Bawardi, Secretary-General of the Abu Dhabi Executive Council and Managing Director of EAD.
He said: “Reintroducing the Arabian Oryx into its natural habitats in Jordan is part of the UAE's efforts to conserve the species, which is not only endangered but also an important part of the Arabian Peninsula's heritage.”
“A similar programme is being developed to reintroduce the extinct species into its natural habits in Iraq, as part of this initiative. Countries in the region have adopted a Regional Strategy to Conserve Arabian Oryx, with plans to enhance coordination in safeguarding the Oryx species,” he added.
Al Bawardi noted that the strategy aims at facilitating the conservation of the Arabian Oryx in the range states with a long term objective to establish a viable population that will roam the Arabian Peninsula.
Monitoring
“The release of Oryx came after 8 decades of extinction of the animal in Jordan. The animals were transferred earlier this year to Jordan after administering medical check-ups and the necessary vaccinations by Al Ain Wildlife Park and Resort,” he pointed out.
According to Al Bawardi, the 20 animals are the 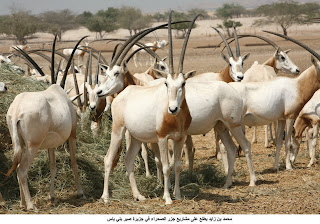 first herd to be released into Wadi Rum, were placed in enclosures to give them opportunities to adapt to the desert habitat. They will be monitored by satellite to track their movements and behaviors to further ensure the animals' safety.
Wadi Rum Natural Reserve
Al Bawardi explained: “Wadi Rum is a protected area covering 720 square kilometers of dramatic desert wilderness in the south of Jordan, with huge mountains of sandstone and granite emerge, sheer-sided, from wide sandy valleys to reach heights of 1700 meters and more.”
“Narrow canyons and fissures cut deep into the mountains and many conceal ancient rock drawings etched by the peoples of the desert over millennia. The Bedouin tribes still live among the mountains of Rum and their large goat-hair tents are a special feature of the landscape,” he added.
The Arabian Oryx
“In general, there are five species of Oryx, including scimitar-horned Oryx, Arabian Oryx, and Gemsbock, Addax and Bisa Oryx. The Arabian Oryx is the only Oryx that exists in the Middle East region, while the other four species exist in African region,” Al Bawardi 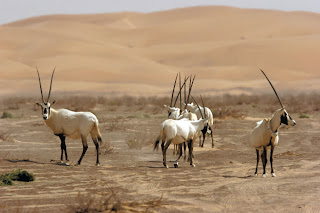 said.
He went in to details: “The Arabian Oryx was officially declared as extinct in the wild in 1972 in its last location in Jiddat Al Harasis in Oman. Its long thin horns curve backwards slightly, and may reach up to 90 centi metres, while its hooves are adapted naturally towards living in sandy areas. The feeds on grasses and young shoots of shrubs, and they are able to derive their nutritional water needs from the morning dew on desert plants”.
“The herds are led by a dominant female, while bachelor males usually lead a solitary life on the fringe of the main herd. Arabian Oryx animal is expected to live 13 to 19 years,” he added.
UAE’s Commitment
According to him, the Arabian Oryx has received a large share of the UAE wildlife protection and sustainable development strategy, as part of the UAE’s long term commitment to conserve its precious biodiversity.
“In the early 1960s, the late Sheikh Zayed Al Nahyan directed to capture two breeding pairs of the Arabian Oryx for the nucleus of a captive-breeding programme in Al Ain. Hunting and habitat destruction were the main reasons behind the Oryx's disappearance after it had once roamed the Arabian Peninsula,” he remarked.
The Abu Dhabi Environment Agency (EAD), chairing the Coordinating Committee for Conservation of Arabian Oryx, had signed a sponsorship agreement in April 2007 with Al Aqaba Special Economic Zone Authority Aqaba Special Economic Zone, towards launching the project.
EAD sponsors the three-year project, with an estimated cost of $1.100 million. The project also entails rehabilitating the habitat and helping local residents to improve their living standards, apart from reintroducing the Oryx into the Wadi Rum wildlife protected area.
During the first phase of this project, a management committee was set up to oversee implementation of the programme.
The initiative has been taken by His Highness Sheikh Mohammad Bin Zayed Al Nahyan, Crown Prince of Abu Dhabi and Deputy Supreme Commander of the UAE Armed Forces.
The committee is composed of representatives from EAD, Al Aqaba Special Economic Zone Authority and the Jordanian's Royal Society for the Conservation of Nature.
Posted by PMA RASHEED at 8:35 AM