By PMA RASHEED
7 Feb 2011, The Gulf Today
THE transport sector contributes about 42 per cent of air pollution in Dubai, and the carbon dioxide emission per vehicle varies from 110 to 250 g/km, revealed Dubai Municipality on Sunday. 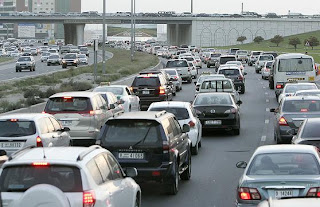 From the total air pollution, over 82 per cent comes from car petrol emissions alone. This is in addition to the tens of thousands of other vehicles that enter the city from other emirates.
The figures were revealed by the civic body while announcing the second edition of “Car-Free Day”, which will be staged on Feb.9. Hundreds of civic employees will be leaving their cars at home and taking public transport to work.
According to the figures made available in 2009, there were 1,021,880 vehicles in Dubai and they emit 23,34,762 kg carbon dioxide per day.
Hussain Nasser Lootah, director general of the DM, announced the environmental initiative designed to cut the number of vehicles on Dubai roads.
“This year more local departments will join more than 1,500 employees in the municipality headquarters and the nearby offices in using only public transport modes to reach their offices,” he added.
“Other participating government departments included the Land Department, Dubai Chamber of Commerce and Industry, Etisalat and the Roads and Transport Authority. All the staff may use public buses, the Metro or water taxis, encouraging the residents to consider alternative transport means for their daily destinations,” Lootah elaborated.
“The private buses that the DM uses to take some of its employees to offices will be left in the garage, and municipal car parks will be closed. We want to encourage the local community to care for their city the best way, by reducing the number of vehicles,” he noted.
According to him, the inaugural edition of the Car-Free Day saved the environment from three tonnes of carbon dioxide emission as more than 1,000 vehicles of employees did not reach the municipality. This is in addition to the vehicles of the DM customers.
“More environmental benefits are expected to be achieved this year from the participation of other government departments in practicing sustainable environmental behaviours and reducing the emission of carbon dioxide that pollute the air,” said the chief of municipality.
He added that the DM will release a detailed report about the result of the initiative. “The study will include the statistics about the volume of carbon dioxide emission reduced due to the initiative by calculating the number of participants and the kind of vehicles they use.”
“The kilometres to be saved per employee may vary as the employees travel daily to the DM offices from different locations,” he said.
Lootah urged the residents to take responsibility for the protection of the environment.
Lootah said the civic body decided to adopt the Car Free Day concept as it facilitates a number of steps that enhance the opportunities for achieving sustainable urban transport, followed by enhanced air quality in the urban area as well as reduction in carbon dioxide emission, which is considered to be a hot gas that causes climate change.
As per the DM’s 2009 statistics, there are 841,444 petrol cars that account for 82.34 per cent of Dubai’s total number of vehicles. The daily CO2 emission from these cars is estimated at 19,221,893kg. About 21,852 petrol trucks come in second place at 2.14 per cent with 499,186kg of CO2 emission.
“While 75,231 diesel cars of the city produce 1,718,572kg of CO2 daily at 7.36 per cent, and 2,456 diesel trucks emit 56,105kg of CO2 at 0.24 per cent, 22,481 diesel buses emit 513,555kg CO2 per day at 2.20 per cent, 24,435 heavy diesel trucks emit 558,192kg CO2 at 2.39 per cent, 18,653 heavy diesel buses emit 426,108kg CO2 at 1.83 per cent and 15,328 petrol motorcycles emit 350,152kg CO2 at 1.50 per cent.”
Posted by PMA RASHEED at 7:13 PM