By PMA RASHEED
8 Feb 2011, The Gulf Today
THE UAE Ministry of Environment and Water (MoEW) has announced on Monday plans to implement an integrated solid waste recycling project for the Northern Emirates. 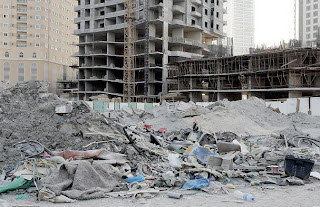 The project, to be carried out in tandem with the Ministry of Public Works, is excepted to commence by mid-year, after a primary study on the solid waste generated in the emirates of Ajman, Ras Al Khaimah, Umm Al Quwain and Fujairah is conducted.
Dr Ahmed Rashid Bin Fahad, the Minister of Environment and Water, told The Gulf Today that according to currently available statistics, the Northern Emirates generate about 30 million tonnes of solid waste per year.
“The project will effectively resolve issues related to the massive amount of waste by establishing environmentally-friendly recycling plants in these Emirates,” he added.
“The project will begin, once the primary study on the waste processing and recycling mechanism is completed and approved by the UAE Ministerial Council for Services,” said Dr Fahad.
“The conceptual study will last for three months at an initial cost of up to Dhs2.5 million,” he revealed.
Fareed Al Katheeri, director of the Technical Studies Department at the Ministry of Public Works, said that the study will look into the possibility of finding appropriate solutions to the problem of waste and the feasibility of implementing the project.
“The present waste production will also be surveyed, in addition to analysing and evaluating the existing systems for waste management. The study will focus on the concepts of waste materials segregation from the source to the disposal levels,” he added.
According to Dr Fahad, the project will be implemented in partnership with both the public and private sector establishments, in order to achieve sustainable development in the Northern Emirates.
“The ministry prepared a field study in 2008 to assess the waste management services at the state level, in wake of the constant increase in the quantities of waste. The survey showed disparity in waste management services across the country and poor infrastructures in the Northern Emirates,” he pointed out.
“If the process of waste disposal in the Emirates is not controlled effectively on a sustainable ground, it will pose large threats to public health, the environment and the biodiversity of the country. Proper planning to create an integrated system for sustainable waste management would only reduce the harmful impacts of waste,” elaborated the minister.
Posted by PMA RASHEED at 4:13 PM