Over 1 million animals vaccinated in 2010 in UAE

By PMA RASHEED
31 Jan 2011, The Gulf Today
About 1,129,146 animals have been vaccinated across the UAE during the year 2010, said a spokesperson from the Ministry of Environment and Water (MoEW). 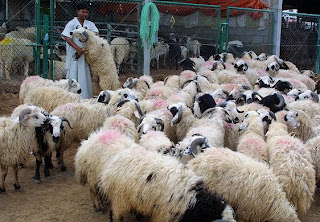 A senior official said that the ministry's strategic objective is to strengthen the country's food safety with highest global standards by increasing levels of bio-security through measures like preventing transmission of epidemic diseases through vaccinations.
Sultan Abdullah Bin Alwan, executive cirector for Agricultural and Veterinary Affairs at the MoEW, said that the vaccine shots have been administered on livestock including sheep, goats, cows and other cattle at farms.
"The MoEW wants to bring down the rate of communicable diseases affecting livestock, and raise vital safety measures for preventing various biological risks and epidemic diseases from affecting the community," he added.
Sumayya Abdul Rahim al Rais, director of the Animal and Plants Health Department at the MoEW, said, "An animal is administered shots of vaccines 10 times during the year for protection from further infection occurrences. Providing them with minerals, vitamins and medicinal supplements is also included in the service."
"The vaccination programme covers various infectious diseases such as foot-and-mouth ailments, lung infections, blood poisoning, intestinal diseases and other contagious infections with purulent skin eruptions," she added.
"Tuberculosis, brucellosis and zoonosis are the major deadly diseases transmitted to human beings from infected animals. The fatal diseases enter the human body by ingestion of meat and non-sterilised milk of the infected animals, or by close contact with secretions of the animals," she elaborated.
According to her, the epidemic of foot-mouth-disease (FMD) has emerged due to a fast-spreading virus that infects cloven-hoofed animals including cows, sheep, goats and deer.
The ministry said it has provided free veterinary medicines to the clinics in various parts of the country. The medicines include antibiotics, anti-internal and external parasites and disinfectants.
The MoEW also called for livestock breeders to report cases of illness to the nearest veterinary clinic or the ministry's
Posted by PMA RASHEED at 5:22 PM