The UAE's first remote sensing satellite DubaiSat-1 has transmitted its first series of images from space.
The high-resolution test images, including a snapshot of the Palm Jebel Ali, were received at satellite's ground station in Dubai earlier on Thursday, according to officials at the Emirates Institution for Advanced Science and Technology (EIAST).
DubaiSat1 had achieved its optimal orbit on July 29, and the satellite orbits the earth four times a day.
"The quality images of relevant phenomena, such as the Palm Jebel Ali, are the first fruits of DubaiSat-1. The successful images 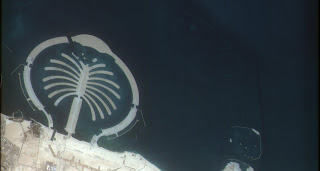 are an indication of diverse capabilities to be realised imminently," said Ahmed Al Mansoori, Director General of EIAST.
"The satellite is sending images of the UAE as often as possible, and we hope the images received through DubaiSat1 will play a significant role in numerous UAE civilian programmes of the country," he added.
Mansoori noted, "After processing and analysis, the satellite's images will provide information and data that serve the UAE's development and assist in decision-making.
EIAST will work with various government authorities and establishments to deliver the needed imaging."
According to him, the delivery of the images from the orbiting satellite confirms the safety and efficiency of DubaiSat-1's operational processes.
"DubaiSat-1 is operating ahead of schedule, and it will continue to capture and deliver images for use in the entire civilian and environmental programmes of the UAE," he said.
The first earth observation satellite of the UAE successfully blasted off into space from Baikonur Cosmodrome space centre in Kazakhstan earlier this week. The satellite orbits 14 cycles daily around the earth, 680km above the planet. DubaiSat-1 was launched into the orbit by Russian launcher Dnepr, along with five other satellites, including Britain's Deimos 1 and UK-DMC 2, Spain's Nanosat 1B, AprizeSat 4 and AprizeSat 3.
According to Adnan Mohammed Al Rais, Associate Research Engineer of DubaiSat1, the satellite launch consists of two segments, namely space and ground. "The current research projects of DubaiSat1 include infrastructure development for urban and rural planning, civil development and construction," he said.
"The space segment comprises the development, design and manufacture of satellite equipment and components of the measurement and imaging. While the ground segment includes the mission control station, image receiving and processing station, antenna and RF subsystem," Al Rais added.
Posted by PMA RASHEED at 3:39 PM