Shower of meteors to light up the UAE sky

Hundreds of meteors will be visible showering over the sky of the UAE in an unusual astronomical phenomenon on Thursday early morning and residents will be able to observe the nature's fireworks.
Dubai's Margham desert area, about 50 kilometres off the city, is the perfect spot to watch the wonder, as the remote area is dark and secluded to enjoy the showering of meteors, according to Dubai Astronomy Group (DAG).
The DAG has arranged a meteor observation trip with all facilities for the public to the Margham desert camp, where astronomical enthusiasts can enjoy the spectacle with up to 10 meteors falling in a minute.
Hasan Ahmad Al Hariri, Pre 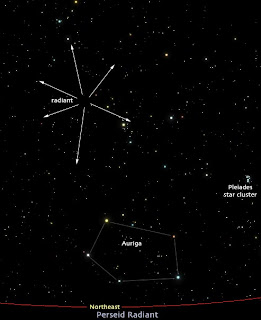 sident of DAG, told The Gulf Today that the Perseids spectacle appears to emanate from the constellation in the northern sky called Parshawyyat (Bearer of Ghoul's head in Arabic). The Perseus is named after the Greek_hero Perseus.
"The Perseids meteors are supposed to be the debris of dirt and ice, falling from the comet named Swift-Tuttle. We will be able to watch the meteors like a lightening straight line moving in the sky as fast as 11 to 72 km per second. It's a celestial incident that had already begun on 17th of last month and runs until Aug.24," said Hariri.
"But the climax of the meteors show will be unveiled on Thursday early morning. The meteors usually fall in the month of August. In the coming couple of days, one of the best showering of the shooting stars can be spectacularly visible as they reach the peak," he added.
Desert Camp
According to him, the spectacle cannot be viewed from parts of the city due to the density of buildings as well as the light spread all over.
Hariri said, "It's the reason for selecting Margham desert area as the ideal spot where people can watch the meteors display under total darkness. Interested people can get together outside Emirates Coop Society in Al Tawar-2 at 9pm on Wednesday in their own vehicles and go in convoy to Margham camp guided by astronomists and officials of the Dubai Astronomy Group."
He pointed out, "Perseids meteor showering is one of the best happenings this year. Even though, the spectacle happens regularly, this particular incident is unique because of the brightness and frequency of the falling meteors."
"As the chances for observing the meteors at night is limited by the presence of a bright moon, we encourage people to move out of the city, especially avoid beaches and similar areas within the city to avoid light pollution," he suggested.
Meteors
Hariri explained that the eteors are discovered in the year 1862. The rocky debris falling from wandering comets takes shape as the shooting stars filling the sky with dazzling colours during the particular time of the 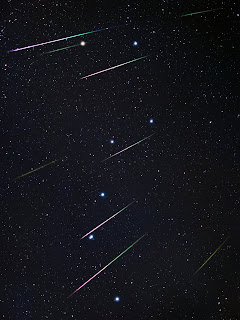 night.
"They are small marble size pebbles with mud which usually burn up in the atmosphere. But it is visible occasionally, with fireballs burning up immediately after touching the atmosphere," he added.
According to him, the falling rocks from the annual passing of a comet are created at the outer rims of the solar system. They warm up as they move towards the sun and the ice melts and evaporates taking large pieces of mud with it and leaving a tail behind the comet.
"The planet earth passes near the path annually, so the small dust balls come from the material in the tail. The comet takes about 130 years to orbit the sun. The meteors melt as they penetrate the hemisphere because of their friction with the higher air layers of the earth," he added.