Reopening of private schools in the UAE after summer vacation will be as per schedule, confirmed the UAE Ministry of Health (MoH) as swine flu prevention measures have been put in place in all such schools across the country.
The ministry resolved the uncertainty over dealing with H1N1 influenza in schools at a session conducted on Thursday for private school representatives including doctors and nurses of schools clinics across the UAE.
The MoH, at a meeting held at College of Medical Sciences of the University of Sharjah, came up with comprehensive swine flu prevention strategies and plans as part of its national educational campaign against swine flu.
Wide-ranging plans
Dr Ali Ahmed Bin Shakar, Director General of the Ministry of Health (MoH) and Chairman of the Technical Health Committee for Combating H1N1, said, "The campaign focuses on wide-ranging plans that include training, education and spreading messages among parents and the general public. All the H1N1 influenza 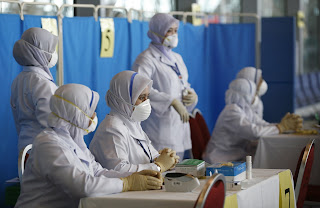 infected students can avail of free treatments through the primary healthcare centres."
According to him, responsibility should be shared among community members and different authorities, at least to prevent, if not to stop the spread of H1N1 influenza.
"The schools are not allowed to provide parents figures on the suspected swine flu cases as it would create a panic situation among them," Shakar pointed out.
Before schools start
Dr Yusef Al Tair, Head of Accidents and Emergency Department at MoH and Member of the Technical Committee for Combating Swine Flu, said, "The MoH will conduct a nation-wide swine flu prevention training programme in different schedules over the coming weeks, covering all the schools in the country before they reopen."
"A selected group of six staff members including teachers, students, administrative and service staff from each school will be educated in the workshop. The trained people will be in charge of working on the precautionary measures to be implemented and they will monitor suspected cases among students or teachers and deal with treatments and follow-ups," he added.
According to him, these trained personnel will be the MoH ambassadors of the swine flu prevention programme in each school, providing timely awareness sessions and lectures for their colleagues.
No med certificates
"Meanwhile, schools have not been permitted to demand swine flu-free medical certificates from parents for their children, on their return to class after vacation," pointed out Dr Gamil M Tourkey, Technical Director of Preventive Medicine Department of the MoH.
This disclosure came in the wake of reports that some schools have already sent letters to parents to produce such certificates.
"The schools are also not allowed to arbitrarily announce closure of their campus in the event of an H1N1 outbreak. The closure can only be finalised after an analysis by the ministry's Technical Health Committee to Combat Swine Flu as the MoH wants to ensure that educational activities will not be disrupted," he said.
Linking officials
Dr Yousif Mohamed Al-Serkal, Acting Director of Kuwait Hospital and Member of the Swine Flu Prevention Technical Committee, noted that the MoH has appointed a team of officials to liaise between educational districts and the MoH.
He said, "In the event of H1N1 suspected cases, the schools have to report the case to the school health department as also the respective educational district. Following that, the link (liaison) official will co-ordinate with the preventive medical department to deal with suspected cases reported from schools in the particular educational district."
According to him, the ministry will inform the schools or post on its web portal about the contact details of the link officials assigned in each educational district.
Advisory to schools
"The ministry also advises the schools to put about 1.5 metre distance between students in classrooms, and if possible, to avoid close contact with infected students. The disease is transmitted through contact with respiratory droplets that can reach others within a radius of six feet," Dr Tourkey pointed out.
Mohammed Al Khatib, Member of the Technical Committee and Coordinator between the MoH and the Schools, said, "In case of a suspected case in the school, the teacher has to take the MoH's primary precautionary measures in the class room itself."
Suspected cases
"The school nurse will check the class room of the suspected case, and will shift the suspected student to school's clinic. Every school has should set up a separate room for the suspected students to keep them isolated until their parents come and take them," Al Khatib added.
He further explained, "The MoH has instructed that parents should be notified by way of a specified format issued by the ministry, in case of their children being suspected of having the virus."
"The parents will take them home in their private vehicles, as public or school transportation systems will cause the transmission of the disease to other pupils," he added.
Hygiene measures
"All desks in the school should wash with disinfectants, as part of the measures to prevent spread the flu virus. Messages on hygienic hand-washing practices should be circulated among the students," noted Khatib.
According to Al Tair, the ministry had adopted a new policy on Aug.16, for testing the H1N1 influenza. No more rapid tests will be conducted for the disease, but confirmative lab tests will be done and the confirmed patients will be referred to hospitals for further treatment.
"All the procedures to deal with outbreak of the H1N1 influenza in schools will be implemented in accordance with the plans drawn by the MoH as well as Dubai Health Authority (DHA)," he stated.
Posted by PMA RASHEED at 2:45 PM