Employees of all food outlets, eateries, cafeterias and restaurants which fail to comply with food safety regulations will have to undergo a regular biennial compulsory training programme, according to a senior official at Dubai Municipality (DM).
"The food outlets will have to sign a contract with an accredited private laboratory, which will collect food samples from the eateries for tests regularly, on a six-month basis. The tests will verify the validity of food prepared for consumption and ensure safety measures are undertaken," said Ahmed Abdul Rahman Al Ali, Chief of Food Inspection Section at the DM.

Inspection system
Khalid Mohammed Sharif Al Awadhi, Head of Food Control Department at DM, said, "The civic body is taking efforts to update its inspection system at eateries as per international standards in order to raise the quality of food served as well as to increase the hygienic environment and amenities of the restaurants."
"The latest efforts to strengthen the inspection procedures at food outlets and eateries operational in Dubai come in the wake of recent food poisoning incidents that have raised serious public health concerns," he added.
He pointed out, "The civic body has formed a special team to update the inspection system for food serving centres. The team headed by Ahmed Abdul Rahman Al Ali includes nine members from the same section and food planning department."
"The team will conduct training programmes for the employees of the food outlets and restaurants in order to educate them on the basics of public health and give lessons on preparing and handling food items," he added. 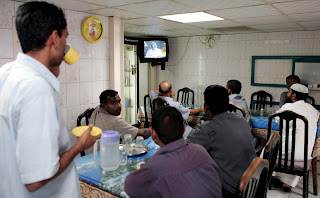 Al Ali said, "The municipality is focusing on the restaurants, which are weak in following the food safety rules sketched by the civic body. Such restaurants will be subject to further warnings to raise their standards and effective changes followed by general fines. The actions will be based on the results of the evaluations."
"The knowledge of the workers on food safety and hygienic cooking and serving practices will be tested in the refreshment training programmes. One of the employees will be chosen to obtain an advanced training in order to deal with him as a health supervisor. The food safety programme titled Safe Menu will conduct compulsory training sessions for the restaurants' management staff," he added.

Erring outlets
Al Ali noted that the erring food outlets will be temporarily suspended from operation in the event of irregularities in maintaining the standards of food. If the violations are repeated for a second time in a row, the restaurant will be shut down temporarily in addition to heavy fines.
According to Al Awadhi, the first phase of the action plan is the review of the current food inspection scenario in Dubai. The newly formed team will determine the capacity and efficiency of the municipality food inspectors by assessing their ability to identify high-risk irregularities happening in the food outlets.
"As part of implementing the second phase of the action plan, the selected inspection team members will undergo a series of in-depth training sessions to raise their efficiency. The technical status and healthy environment of the eateries will be checked to ensure that they comply with the regulations of the civic body," pointed out Al Ali.
According to him, the food studies and planning section will adopt a standard food menu for all restaurants as part of a new scheme approved by the higher authorities of the municipality.