BY PMA RASHEED
The Gulf Today, 6 Aug 2009
Dubai has imported 74,851 foodstuff consignments during the first half of the year 2009, according to sources at Dubai Municipality (DM).
Iman Ali Al Bastaki, head of the food trade unit at DM, said: "A number of 133,347 varieties of food items has been imported to the emirate, in addition to 551,000 tonnes of foodstuff were examined in the municipality laboratories."
"Food consignments are not accepted if unlicensed companies practice food trading activities by importing food items from other countries. The DM also rejects shipments that violate the food label regulations appro 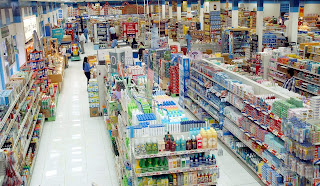 ved by the competent authorities or the rules of import," she added.
According to Bastaki, the foodstuff importing company should have facilities like storerooms that complying the civic bodies rules and regulations regarding the safety of public health. The food control body at DM plays a significant role in controlling the entire foodstuffs imported in the emirate all around the year.
Bastaki pointed out that the food control bodies at the municipality play an outstanding role in controlling all foodstuffs all around the year.
"The foodstuff imported for selling in the emirate should not contain harmful colours which are banned due to their adverse effects on human health. All the food items are made available to consumers after undergoing international standard quality control specifications. Unchecked items are not traded in the country," she noted.
Bastaki pointed out, "The municipality registers all types of imported food items using an advanced global electronic system used all over the world. The system ensures safety of public health as stringent measures have been applied for permission of sales of the imported food items inside the UAE. Similar procedures are applied on food items produced locally."
"Regulations as per the latest food quality verification standards have been applied by the DM. Clauses regarding the food label and expiry date information have to be included as per the new law approved by the Gulf Standards Authority, as well as the laws outlined by the authorities concerned in the UAE," she said.
Posted by PMA RASHEED at 3:14 PM