Oops, they did it again. Hundreds of meteors were expected to flare up the sky early Thursday morning, but didn't. The shooting stars disappointed hundreds of astronomy enthusiasts who had congregated in the darkness of the desert to catch a rare glimpse of the spectacle.

Despite worsening weather conditions that included sand storms in the wilderness of the desert, about 400 residents kept their date on Wednesday evening at Dubai's Margham desert area, located 70 kilometres off the city, to observe the meteors expected to be showering in the early morning of Thursday.

"People from different walks of life attended the scheduled viewing, but the moon decided to play villain. Its rays curtained the visibility of nature's fireworks," said the organisers. 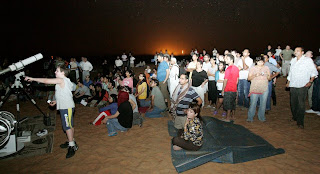 p (DAG) had organised this meteor observation camp, intended to give astronomical enthusiasts a unique opportunity to enjoy the spectacle that promised up to 10 meteors falling in a minute.

Hasan Ahmad Al Hariri, President of the DAG, pointed out, "Dust in the air was increasing at the time. But the main reason for the meteors not being visible was the glare of the moon that appeared over the horizon."

"We could bring together such a huge crowd for the scientific event, but we felt extremely bad as the climatic conditions played truant. When we started from Dubai, the wind was normal but grew in intensity in the desert, thus proving to be an embarrassing experience for the viewing public."

"In the desert, the ground sand was moving rapidly, making it difficult to set up the facilities, equipment and power systems. It even proved difficult for the people sitting on the ground," he added.

"In an ideal event of the phenomenon, we can expect around 60 to 100 meteors per hour. But the glare of the Gibbous moon (three fourth of the normal moon) blocked out the meteors from the eyes of the observers," explained Amol Mane, a working member of the DAG.

"We expected the Perseids meteor shower to be one of the best this year. Meteors are small marble-sized pebbles with mud, which usually burn up in the atmosphere. They are visible occasionally, with fireballs burning up immediately after touching the atmosphere. We were expecting to see the meteors like a straight line of lightening moving across the sky as fast as 11 to 72 km per second," he added.

"Meanwhile," Hariri explained, "To watch the solar system, we provided the participants three different telescopes including a big 10 inch telescope, a five inch refractor and an eight inch reflector." 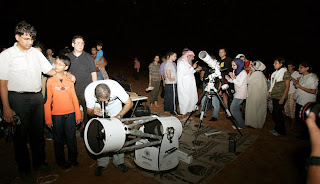 d watch different aspects of the solar system, comets, milky ways, galaxies and constellations. The participants were given lessons on how to observe the sky in its full spectrum, by lying down on the ground and watching the sky on 180 degree level."

According to Sayed Mohammed Farrukh, a marketing support executive with du, the meteors observation camp was inspiring. "I am pretty happy, as I had a unique experience in the desert. I am attending a scientific camp for the first time in my life."

"Unfortunately, our mission to watch the spectacular meteoric shower lighting up the sky of the UAE failed. But we came to experience the passion of the people behind the voluntary organisation, the Dubai Astronomy Group (DAG)," he said.

"Now, I want to study more about the stars, sky, galaxies, milky ways and other wonders of the universe," Farrukh revealed.

Jermi Husain Dacunhia, a nine-year old Brazilian boy seemed to be the youngest among the science camp participants.

"Watching the sky, especially the moon through a telescope is my passion. For that only I compelled my mom to join the observation team. I am disappointed at not being able to see the meteors, but it was fun as I could catch some awesome views of the moon, Jupiter and the constellations," the boy said.

"My ambition is to be a scientist. I also have interests in writing science fiction as I much love the fantastic world of science 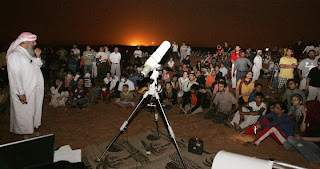 Yara Zhulina, a Ukrainian national residing in Dubai, attended the camp along with her friend Nataliya. She said they vastly enjoyed the trip well, as she could meet a number of people who are interested enough in astronomy to get together in the dead of night despite having to rush back to their offices early next morning.

She said, "I am not an expert in astronomy, but I simply wanted to watch the meteors shower when I heard about the unusual event. Even though I missed the meteors, I could watch the moon, Jupiter and other constellations in the presence of astronomers and experts in the subject and got some valuable lessons on astronomy," she added.